It has been a busy month of November for me with assignments and work but on the 5th of December 2007, I was able to do something I have wanted to do for nearly 5 years... 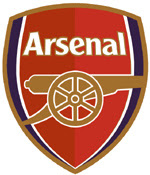 Arsenal
I watched the game in St. James Park, which is the stadium for Newcastle United Football Club (NUFC) with a couple of my friends. The match only started at 7.45 p.m. UK time but we were so excited, so we made a move to the stadium. As we journeyed towards our destination, we were able to see hordes of people walking towards the same destination. Yes, that's right. Hordes. A vast multitude. Thousands. The mood was getting electrifying. So we headed up to our seats in the stadium. When I reached the top of the stadium, my goosebumps stood. As I entered the entrance, the roar of the fans echoed throughout the stadium. 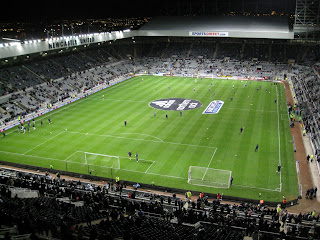 St. James Park
Fans of both teams chanting their respective songs, clapping. I was overwhelmed. I know now how it feels being in a stadium, it was great. I managed to spot a couple of players before the match started while they were warming up. In the Arsenal team, a few main players didn't appear. Fabregas, Hleb, Van Persie are among the few who didn't turn up due to injury. Then we headed to our seats in the stadium. FYI, we were sitting in the NEWCASTLE UNITED side so it kinda sucked for me. >.< 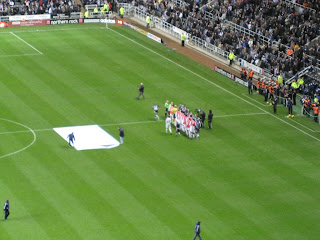 The ceremony. I don't know what its called. =P
Then the whistle was blown. Fans started cheering and literally shaking the stadium. Within 3 minutes of the game, Arsenal scored with a beautiful shot by Emmanuel Adebayor. Although there were only roughly 30% of Arsenal fans but it was loud enough to be heard in the stadium. I wanted to join them in celebrating but I didn't and couldn't do it in front of the Newcastle fans. Sad, I know. Anyway the game continued. 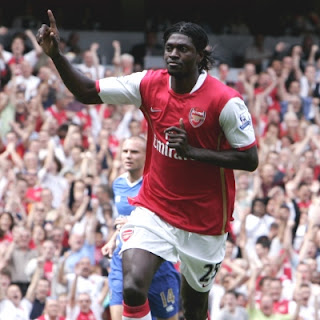 25. Emmanuel Adebayor
As the game progressed, the fans continually chant their songs and anthems. During the first half of the game, the Newcastle team was devastated. Passes was not completed, high balls were not accurate and the Arsenal team was the opposite. Newcastle sucked. Even the fans around me agreed. They were shouting harsh words like 'F@#$ Off'', 'F@#$ing B@$%^r^$' and 'B100dy S^1t'. Mostly was towards their own players because their performance sucked, badly. 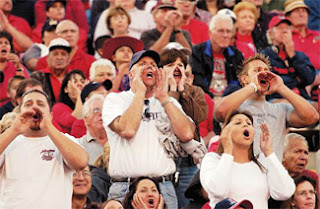 Boo! Get out you B100Dy Sh1t3!
After the second half started, Newcastle started to look more aggressive. Probably Big Sam gave them a good ol' lecture. Alan Smith, striker for Newcastle United was the one creating a lot of chances. He tackled hard and played hard. He was also Man-of-the-Match. 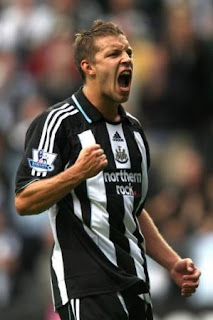 17. Alan Smith: ROAR!
Then during the 60th minute of the match, Steven Taylor scored for Newcastle. The crowd went mad! It shook the stadium. Literally. The goal was kinda disappointing for me but it gave me the chance to feel the atmosphere of the passionate fans celebrating the goal. Then 30 minutes went by with the normal chanting and cheering of the fans while the both teams try to create chances to score more goals. The final whistle was blown. It was the end of the match. Arsenal 1, Newcastle United 1. A draw.

Immediately everyone started leaving the stadium. We followed after taking a few shots of the stadium. As soon as we reached the the ground level of the stadium there was a waiting area where a few people were lining up. At that time, I was with my friend, Shane. We figure out that the Arsenal players will be boarding the bus to bring them home. AUTOGRAPH CHANCE! We searched desperately for any paper and pen but only managed to get a small white piece of paper and a pen. Then one by one the players started to appear! OH WE WERE EXCITED! We started taking pictures of them and tried to get autographs. First Gael Clichy appeared. We didn't manage to get his autograph but got a picture of him. 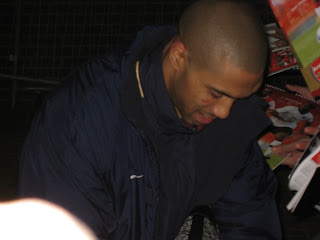 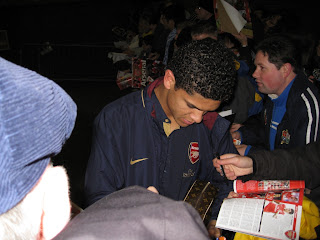 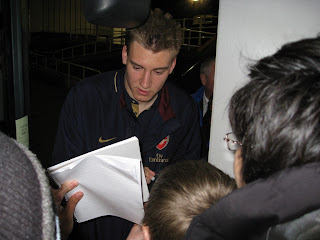 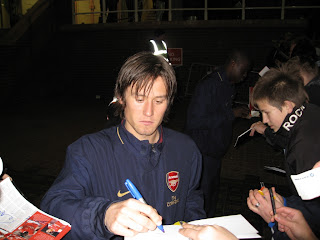 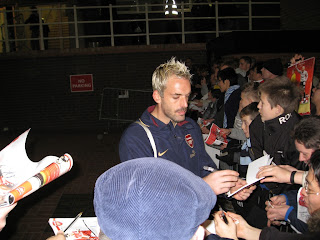 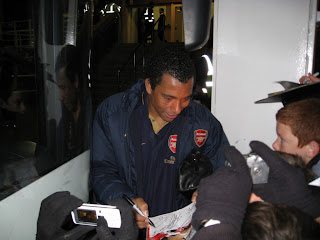 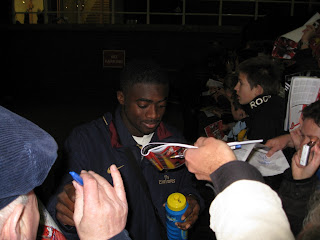 5. Kolo Toure
There were several other players such as Willam Gallas, Theo Walcott and Adebayor but unfortunately I didn't take any pictures of them because I was busy getting autographs from them. Fortunately I got them! HAHAHA 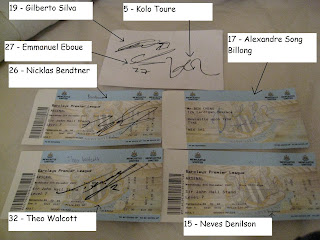 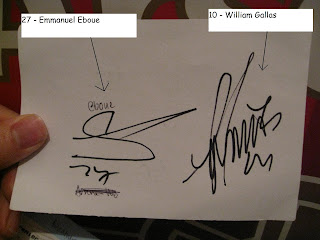 More autographs! and yeah Eboue signed twice for us!
Well it was the single most enjoyable and exciting night of my life. This will be the first time and it will also not be the last, I will be watching another football match. Also to all my football friends, I miss futsol! Cheerio!
Posted by Clement Yee at 05:39