I have some good news and some bad news.

Firstly, a few weeks ago, I accidentally lost my V3X after I found out that my pants had a hole in the pocket! I had that phone for nearly 2 years and although it was getting worn out, I was getting used to it. It had some sentimental feelings as it has been with me through good times, bad times, hot weather, cold weather, sweat, dust, and grime. Sometimes I really miss it. Anyway that's the bad news.

I got myself a new phone and I'm damn well proud of it because its my first ever mobile phone that I have had in all my life! As some of you readers may know, that all my previous phones were 'hand-me-down' phones so it gave me no choice of getting my own at that time because... well... I didn't wanna spend a big chunk of my money on new hand phones. :P 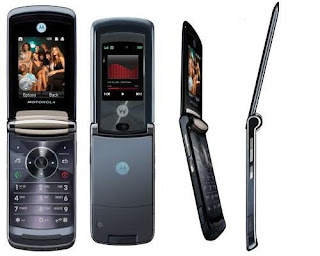 The physical body of the V8.

The clamshell phone is extremely thin and light. With the weight of 117g. Its damn light for me. Not only that its thin enough to be placed in my pocket without bulging out like my other... side of the pocket which my wallet is in. :) 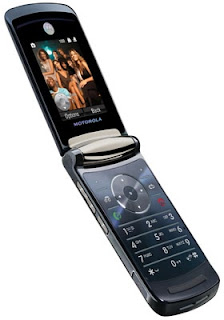 *Muacks*
The phone's new Linux OS software is way faster and efficient then the old Motorola's software although it tends to freeze sometimes when I'm multi-tasking (even when Motorola claims that it is using a faster processor) Anyway, the phone doesn't have any memory card slot although it does have a built-in 512mb memory storage. It doesn't bother me much as I hardly place much pictures nor music with it. 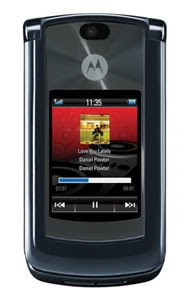 2 inches wide touchscreen, my friends. Bloody awesome.
As you can see from the pictures as well, the phone has a damn big external screen. That screen is 2 inches wide which makes it the biggest in the market currently. Not only that, its a TOUCHSCREEN. You can view your messages and manage music without even flipping open the lid. 'Talking' about viewing the messages, did you know this phone can read my messages aloud? How cool is that! Damn! Its damn cool. Even its name is damn cool. V8. Reminds me of a V8 engine roaring now. Awh. The power, beauty, and the elegance. I'm gonna be damn happy for a few months knowing I have something new to play with. MUAHAHAHA!!! 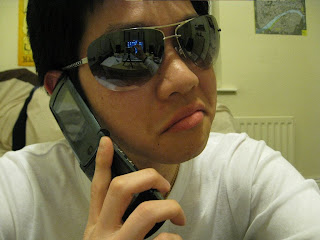 Look at that... I can't stop smiling now!

Glad to hear that you bought a new phone. But I suggest you to buy a new pants first :P

haha, I plan to sew it. Damn pants here cost a bomb.

lol.. how did your pants end up with a big hole which ur phone can slip through it!! i think u been scratching ur crotch too much hahahhaha...

nice phone btw. but i personally think the shades is too big for u man...

Bought it thanks to e-bay.

Careful.. too light and thin and you might throw your pants into the laundry.. with the phone in it.

ebay is EVIL!!! hahahha just cant stop shopping in it..!