All this rants and I'm beginning to sound like a girl! Damn, that shit is killing me! Its time for me to post some testosterone into this blog.

A couple of weeks ago, I attended a Malaysian Ball Night held in my uni by senior Malaysian students. Actually it was a last minute decision to attend the ball. I figured that hopefully I'd find some buddys who came to Newcastle but didn't know of so I went. For the ball, I wanted to look matured, cool and stylish. Sorta James Bondish-style (sounds kinda weird, doesn't it?) So I bought a black designer shirt and wore it with err... pants? Not forgetting my underwear. Anyway I looked cool, stylish and excellent..... Ok Ok I didn't look THAT cool. Wasn't so stylish but was still excellent (Hey, I was one of the good-looking guys in the ball). Anyway I attended to the ball with a couple of my house mates, Jessie and JingWei a.k.a JW, and other friends. To make a note, Jessie was specially attractive that night with her cheongsam. Oh I wish I never had dreams. hehe. =D 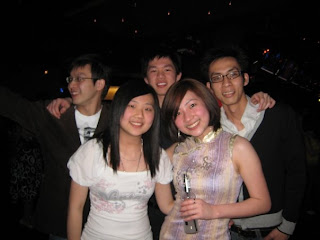 Did I mention Jessie was specially attractive?
Anyway after we entered the ball, it was packed with so many people that I didn't believe that all of them were Malaysians. and I was right. The place was packed with Hongkies, Indonesians and others but there were only a few 'guai los'. Sucky when we are living in a foreign country and no locals came along to join. HOWEVER, there was loads of hot, salty, spicy, steaming... girls (did I mention that there was a buffet for the ball too?) that I got no time to even snap photos or even pay attention to what was happening in the ball. (Sorry B, I'm a guy. Its in our DNA to 'salivate' for the opposing sex. =P)

After all the 'salivating' and some chit-chatting, we took our seats and the ball started. We had our dinner in the ball buffet-style (Lame, I know) eating so-called 'Malaysian' food. Anyway that wasn't the only thing. Both the MCs on the stage were a laughing joke. What I mean by a 'laughing joke' is that they were so L-A-M-E, that I yawned. Half of the time that they were announcing the events, no one bothered.... until the lucky draw came on. ROFL.

After all the babbling, the most exciting part of the ball started. It was the traditional dance of the three main races in Malaysia. The Chinese, Indian, Malay dance. I personally call it the Ma-In-Nese (sounds awfully similar like a sauce...). Anyway the dancers should be applauded and be encored as they were beaaauuuutiful. Both the dance and the dancers. Absolutely stunning. Really. We recorded the video down but that would be another time as its kinda 'inconvenient' for me now.

After the dance, a couple more of the lame MCs announcements, some light drinking and chit-chatting again, and the ball was over. BUT, it wasn't over for us. Not just yet. We decided to join the crowd into heading to a nightclub where an extra event was held. Hot girls, alcohol, and good music. What the hell were we waiting for! GO GO GO!

We headed to the club called Blu Bambu which is a hotspot for asians like us in Newcastle. Here clubbing is a whole different level from Malaysia's nightlife albeit the latter is way more fun. Smoking is banned indoors and that includes nightclubs, pubs etc. Nuff said. As usual, we entered the club, drank, get slightly (aroused, excited, high, whatever you wanna call it), and started to mingle. The same hot, spicy, salty, steaming girls were there too but were hogged by a bunch of guys like a pack of wolves so I decided to be the 'Lion' posing around the area (I stood in one place, never moving).

Then Leong a.k.a. J.Loh and See Tho a.k.a. Loong Kor and Jesmine arrived. We started dancing getting to know some girls, meeting familiar faces and so forth. You know how clubbing is. After that, we headed back home. That wraps up the Malaysian Ball Night for me. Btw we managed to snap some pics. 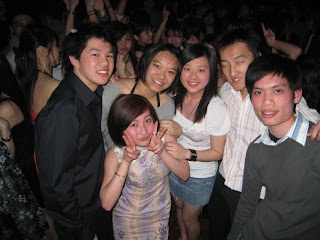 Wasn't I cool or what! hahaha 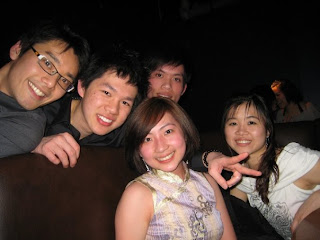 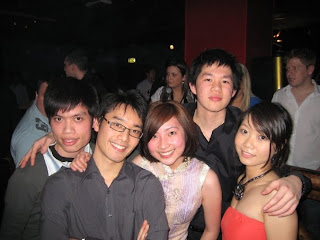 Heh. J.Loh's 'co-worker'. She a girl working with him at a restaurant.

Well, I think I injected some testosterone into myself. Look forward to more of it soon! Till then!

Finally an outing post from clem-the-man. Your blog started to bored me until I read this post, I feel like I want to be a part of it. Hahaha. Few months more and you'll be able to taste the authentic 'Malaysian' food back here.

Oh yeah! I am waiting for it too haha.

Anyway what happen to YOUR blog? I can't view it!

This is my new blog URL - http://ivan.bohritage.com/

testosterone it is!! hahahahha